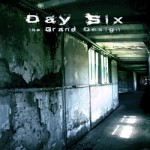 Let’s call a spade a spade: Day Six, a quartet from Veghel, The Netherlands, is by far the best progressive-metal band in The Netherlands. Actually, listening to their latest studio album ‘The Grand Design’ I dare to say that many internationally acclaimed acts would do nicely as a the support act for Day Six, instead of vice versa.

Although Day Six can be compared to loads of other bands, in all honesty you just should not do that. Just listen to ‘The Grand Design’ and realise that Day Six would be perfectly capable to live up to any comparison and on top is adding a healthy dose of quality and ingenuity.

‘The Grand Design’ is a concept record of exceptional quality; an album on which tracks on average last six minutes (‘In The End ’, the final song of the album not included). The longest track being over 16 minutes (?!) (make sure Iron Maiden doesn’t find out, before you know they will be releasing the extended version of Rime of the Ancient Mariner). 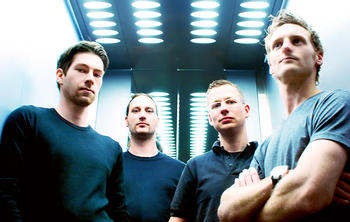 The band, consisting of Robbie van Stiphout (Guitars/Vocals), Daan Liebregts (Drums), Nick Verstappen (Bass) and Dolf van Heugten (Keyboards), seems to be using the same engine fuel as for example Dream Theater, Rush or Tool. The performance of the band is first-rate and clearly indicates they have a set of ‘musical balls’ that would make Lemmy of Motorhead refer to as ‘Sir’ (apologies for the direct translation from Dutch).

‘The Grand Design’ alternates rock-solid riffs (which would be right in place on a Rammstein or Tool album) with guitar and keyboard solos rivaling the likes of Kirk Hammett (Metallica) and Mark Kelly (Marillion). The track ‘lost Identity’ contains a one minute guitar solo (03:12 to 04:16) that would make David Gilmour in his best days work for his money (and, no, as far as I know Robbie van Stiphout did not have himself committed to a mental institute).

Singer/Guitarist Robbie van Stiphout’s vocals are of international quality; well-balanced and fully in service of the music. It is easy, however unnecessary, to make comparisons with legends like Geoff Tate and Bruce Dickinson (myself, I seem to hear a bit of Fish every now and then!). Van Stiphout’s voice sounds authentic, especially when realising that at the same time he is playing some killer riffs!

Liebregts drums sound thick and pave the musical ‘high-road’ with excellent double bass riffs, syncopes and crystal clear china cymbals; all this without being overly dominant. In Liebregts wake Verstappen’s bass licks weave the boundaries in which the soloists can go wild. Both van Stiphout and van Heugten happily make use of the opportunity. As far as I am concerned Day Six delivers a record on which each track is epic without becoming pretentious.

Bear in mind that each song on the album is great, so choosing tracks that are exemplary for the album is rather difficult. Therefore, I am not making any choice. Do what I did, buy the CD, wait until it is delivered, grab a glass of wine (beer or non-alcoholic beverages are allowed) and schedule two and a half hours of time for listening to the album. Indeed, two and a half hours. Simply because you will want to replay the album straight after the last notes have passed your speakers. I am sure you will find that ‘The Grand Design’ only gets better and more interesting the more you listen to it.

I sincerely hope Day Six will never ever quiet down, as the band can easily match any international act in the same scene. Based on their last studio album they simply deserve a shot at the main international stage.

However, although the album ‘The Grand Design’ is [please enter your preferred superlative], I cannot supress a feeling that every now and then the band is holding back. If this is under the pretence of “Let’s keep things exciting for the next record.”; fine, I cannot wait until the new album!

With ‘The Grand Design’ Day Six shows that the grass isn’t always greener on the other side of the fence. The grass in Veghel is lush and rich in colour, leaving you happy and fulfilled, except perhaps, for an auspicious hunger for more.