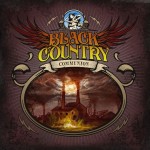 Whenever hearing references to ‘superbands’ I am usually rather quick to pass and turn the other way. Especially as, more often than not, most so-called ‘superbands’ find themselves getting stuck in repeating their successful achievements from the past. In all honesty, Black Country Communion is not extremely innovative and they sound suspiciously similar to a combination of Deep Purple and Led Zeppelin on steroids. But, my God (and this is coming from an atheist), what a classic album! From start till end Black Country Communion is a kick-ass, ironclad rock album. Glenn  Hughes produces his toughest voice since Deep Purple and Joe Bonamassa once more confirms why he is considered one of the very best guitarists in the world (and rightly so).

The fact that Derek Sherinian has teamed up is a nice to have, nothing more, nothing less. The former keyboardist of Dream Theater (among others) acts as a nice layer of icing on the delicious proverbial cake baked by Hughes and Bonamassa. However, honestly, Sherinian hardly ever really stands out. 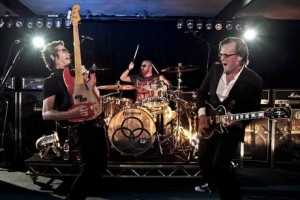 Much more than a nice to have is the fact that Jason Bonham, the son of John Bonham (yes, the drummer of Led Zeppelin), is seated behind the drum kit. Jason’s drumming is superbly adequate. Nonetheless, with the likes of Hughes and Bonamassa on his side Bonham’s work is somewhat pushed to the background where individual excellence  is concerned.

So, why is this a great album? Well, Black Country Communion is an album with a killer opening song, something that makes me want to find out more about the rest of the album. The song ‘Black Country’ is a fast-paced, raw rock anthem, drenched in the smell of leather and rumbling exhaust pipes. As my brother pointed out when he first heard ‘Black Country’, ‘it’s better not to be playing this song while driving as you most likely end up with lots of speeding tickets.’ Then again, buckle up, close your windows, crank up the volume and enjoy the ride.

Whereas any song on the album is great I believe the most notable tracks on Black Country Communion are ‘Song of Yesterday’, ‘The Revolution In Me’, ‘The Great Divide’ and ‘Stand’, of course including the aforementioned opener ‘Black Country’.

‘Medusa’, an oldie by Trapeze, might warm the hearts of a-many aged rockers, but whether it contributes to the album? Well, why wouldn’t it. The song is rock solid and displays a set of muscles that would make Mr T. look like Justin Bieber (hypothetically speaking, of course, we would not like to set off Mr T.).

The album ‘Black Country Communion’ is a rollercoaster of great songs. Each track is appealing and seems to become better everytime you listen to it (isn’t this the case with most great albums?).

Black Country Communion sounds like a well tuned band, combining the best of Deep Purple, Led Zeppelin and Black Sabbath, maintaining its own identity and character. Guitar virtuoso Bonamassa seems to feel relaxed and comfortable next to Glenn Hughes, adding to the quality of the solos. Instead of hammering down endless solos that will bore your socks off, Bonamassa presents authentic and memorable material.

As mentioned, Black Country Communion sounds like a well-balanced band that has been around for years. A band where Hughes and Bonamassa show a mutual respect by leaving eachother enough room to excel. Could this be the difference with other ‘superbands’? Bands that usually sound like loose sand; barely having mastered the songs at the time of recording, let alone play their songs from the heart. Black Country Communion proves to be different. They prove that a ‘superband’ can play with devotion and without reservations. Albeit with a slight air of nostalgia, the self-titled album Black Country Communion strings one pearl of rock after another.