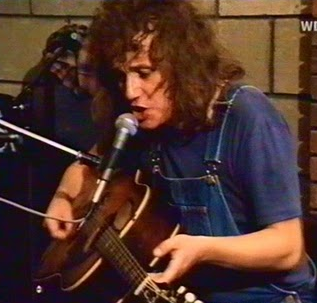 Only recently I was introduced to the music by Kevin Coyne. It must have been just short of two years ago that I first heard, or rather, saw Kevin Coyne play. If I remember correctly it was on a typical Friday night (let’s make that Friday night) that I was lying on the couch, lazily flicking through the 65+ channels of my digital TV.

BBC4 was broadcasting some ‘best of 70s Top of the Pops’ music show. On a side note, I highly recommend BBC4 for its wonderful music shows and documentaries.
Following some obscure artist whose name I cannot recall, a trio appeared on screen. A trio of which the appearance of the singer/guitarist immediately drew my attention. His wild, ruddy hair hung at shoulder length, acting as a curtain allowing a robust nose, a broad face and a chiselled mouth to peek through.
As if seated on the porch of a run down ranch he cradled his acoustic guitar in his lap. The song started with only a few guitar strums, after which a voice that would make Bob Dylan shake in his boots mercilessly set in. After the first verse there was not any doubt left, this name I would remember for a long time to come: Kevin Coyne, House on the Hill.

Remarkably the version of House on the Hill I am referring to has never been released on a studio or live album of Kevin Coyne. The original version of the song can be found on Marjory Razorblade, but honestly, does not even come close to the BBC version. I managed to find the song on YouTube and included a link so it is clear what I am talking about.

Kevin Coyne / House on the Hill

Lyrics - House on the Hill

Well I’m going to the house upon the hill, the place where they give you pills
And the rooms are always chill and never cosy

Now this pagan life is getting me down, my brow is filled with a furl and a frown
My eyelids lower as low as can be but I’m not sleeping

Where the big red face of the man on the beat
Says “Hey, have you had something to eat?”

Sticks out his yellow teeth, they’re all for biting
And where I don’t have a cent and I don’t know how I’m gonna pay my rent
I think I’ll turn bent and make some money

Well you’d never lift a regular hand, calling me a lazy man
Who on earth will ever understand I’m really trying

So I’m going to the house upon the hill, the place where they give you pills
And the doctors they don’t kill cause they’re so friendly

As far as I am concerned this song is perfect. The rolling strum pattern of the rhythm guitar, with the haunted, crackling vocals of Kevin Coyne on top. From the slide guitar (Gordon Smith) that enters surprisingly quick, to the drums (Chili Charles) which seems to feel out the first verse before deciding on what rhythm to lay down.

Despite its musical ingenuity the lyrics take away the prize. It takes Kevin Coyne only few words to describe a complete profound story, including images and sentiment. At the same time the listener is left ample room for interpretation. 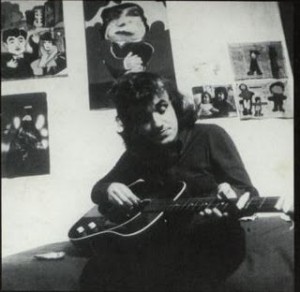 House on the Hill is packed with examples, for instance, take a look at the very first line: ‘Well I’m going to the house upon the hill, the place where they give you pills’; the melancholy resounding in the vocals expresses much more than those nine simple words. It draws images of someone being on his way to a place with a dark past. A place justified in its existence, albeit on the outskirts of society. A place which superstition generally disallows to be mentioned by name and preferably is not talked about at all. Similar to the practices taking place. Bear in mind that this song dates back to the early seventies, an era during which the ‘socially less acceptable elements of society‘ were being paid a lot less attention in both the UK and the Netherlands. Of course, Kevin Coyne could have sung that he was on his way to the nuthouse, where, day in, day out he would be feeding pills to mentally insane. Most likely the song would never have appeared on Top of the Pops (then again, that same year the UK Top 100 included Rockin’ Pneumonia and the Boogie Woogie Flu van Johnny Rivers).

Besides being a framework in which each line of each verse complements the overall depth and storyline, House on the Hill is funny, triggers the imagination and above all, emotional. All this comes together in the simple, but sublime refrain. A refrain of which the first line grabs you by the soul, only to have the second line twist it a quarter turn.
The lamentation of only two lines and just 14 different words turn out to be a crucible of emotions in which melancholy, sadness, anger, frustration and powerlessness have ended up in a fistfight, only to find out by the end of each refrain that there are no winners.

Without doing a full analysis of the song I state that ‘House on the Hill’ in all its complex simplicity truly is a classic song. Kevin Coyne wails on cue (for example ‘Never notice the leaves that fall’, of ‘I don’t know how I’m gonna pay my rent’) and sings with love, passion, and where required, respect (such as in ‘cause they’re all crazy’, of ‘My eyelids lower as low as can be but I’m not sleeping’). Amidst this mix of emotions Coyne depicts a bleak image of life in the seventies, which in itself sets the feel and era of the song.

By focusing only on ‘House on the Hill’ I realise I am by-passing the career of an interesting and versatile man. A man who single handedly created almost as many albums as The Beatles and The Rolling Stones combined. The fact that I do not fancy most of his work is something I can live with, and actually is unimportant for this writing.

This article is not about the singer/songwriter Kevin Coyne. No, it is about the moment of being grabbed by the throat when listening to a song for the first time. When you know that, even before it has ended, a song has brutally claimed a spot in your existence. It is about the very moment when you realise that your heart serves as a rundown house squatted by the music you represent, the music that moves you; music that grabs a hold and never lets go.
It is for these reasons that Kevin Coyne, in his immortality, is happily squatting a room in my music loving heart. Something to which I gladly turn a blind eye.